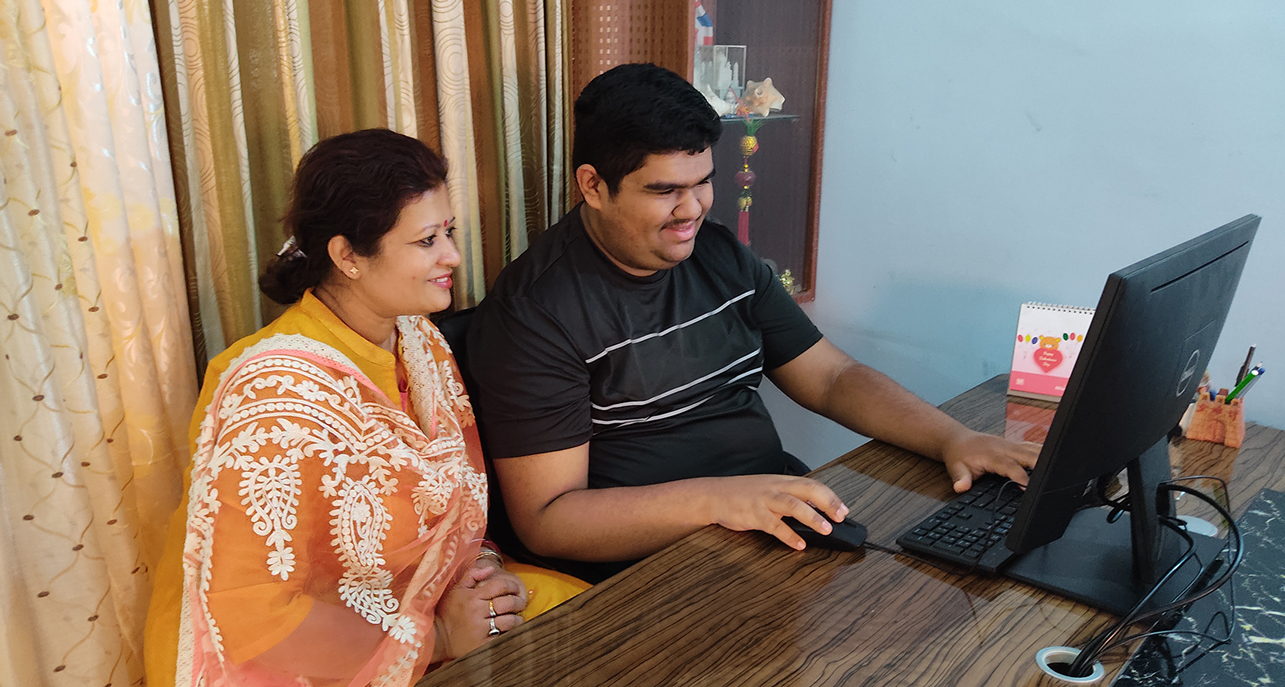 Aditya’s journey has been an extraordinary one. From a musician, an artist and now a future coder. The journey of 18 years has been a tough but fulfilling one.

Aditya’s birth was a big celebration as he was the first born in both families. Immediately after his birth, we shifted to the UK and he spent his initial years there. Once we relocated back to India, Aditya got admission in a kindergarten in a mainstream school in Bengaluru. Although he seemed like a regular kid otherwise, there was something amiss that we couldn’t pinpoint in him. I distinctly remember that during the preparations for the Independence Day celebrations in the school, we were informed by the school that he seemed completely engrossed in the music-band playing outside and paid no attention to the teacher teaching in class. To our amusement, although he had no exposure to the Indian National Anthem, he picked it up on his own just by listening to the band playing outside. We also noticed that he’d often hum bollywood songs which we would wonder where he had heard from.

While rejoicing at his skills, we also felt that he wasn’t following verbal instructions appropriately for his age. Even though the other milestones were seemingly normal, we noticed that the speech that Aditya had acquired initially wasn’t progressing beyond a certain point. The pragmatics and give and take of communication was lacking. His class teacher too noticed and informed us that he was different from the rest of the class and this deepened our concerns. That is when he was assessed by a premiere institute in Bangalore and given a diagnosis of PDD NOS – Autism Spectrum Disorder at the age of four and a half years.

Our dreams were shattered. As parents, it was very difficult for us to accept the reality that stared at us at the face, as both of us come from highly educated backgrounds. Aditya’s father, Avijit is an engineer from IIT ( Delhi ) and MBA from IIM ( Calcutta) and I am a graduate in Electronics with an MBA degree. All of a sudden we had to deal with shock, grief and the difficult question of ‘why us?’ which nobody had the answer to. Thus, began our unexpected journey into the world of Autism and eventually to the path to empowerment.

Like any other parents, we started running from pillar to post figuring out ways to help Aditya, while at the same time trying to unravel the enigma that surrounds Autism ourselves as I learnt more about Autism, I assimilated that it’s not something which can be overcome overnight, or wished away. I conceded that it would need a lot of effort, patience and perseverance. I decided to quit my job as an IT professional and take up Aditya’s cause and be his advocate. We were determined to build on his abilities and bring up a happy confident child.

We had to go through a series of rejections, trials and tribulations in the process. Intense interventions and follow up at home of what was taught in the therapy centres, made Aditya school ready but alas the schools were not ready for him. Although Aditya could do everything and probably much more than kids of his age, academically, the label of being ‘special’ was a major impediment. From the beginning, we wanted him to study in the same environment as any other child. It wasn’t easy to get an admission in a mainstream school though. After knocking the doors of nearly fourteen schools all over Bangalore and getting rejected, God directed us to ‘Insight Academy’ an inclusive school in Bangalore. The Principal of the school wholeheartedly accepted him and so began his academic journey. We shifted base to a place closer to the school. My husband had to travel nearly 40 kms to his office from the new residence but it seemed worth it.

We were finally at peace because our child was in an educational setup that was conducive to his growth as an individual just like any other kid. He was accepted, understood and celebrated for what he was. The biggest achievement was Aditya appearing for the 10 th board examination in 2020. Writing the examination during the pandemic while wearing a mask, gloves, head shield and sitting for 4 hours wouldn’t have been easy for a child with anxiety and sensory issues, but as always, Aditya did it. He cleared his exams with flying colours and made us proud. He has now joined college and is pursuing his PU in commerce stream from Vedantha PU college. This is a feat which we couldn’t have imagined 10 years back when more than dozen mainstream schools rejected admission in grade 1.

In addition to academics, we realized Aditya’s talent and his artistic bent of mind at an early age. Aditya had exceptional skills in music. We decided to develop his core skills and abilities. Thus began my journey to search for a music school. But just like the mainstream schools, many gurus were reluctant to teach music to a special child and had expressed reluctance to train him in a group. Finally with the grace of God and friends, we met the Principal of Malancha, a pioneer Institute of fine arts. Aditya started learning Rabindra Sangeet from the age of six at Malancha.The Principal soon took a liking for Aditya and provided one on one classes in addition to group classes and helped him hone his skills. Aditya cleared his junior and senior diploma and today is a graduate in Rabindra Sangeet from Rabindra Bharati University and is the topper of the state of his batch.

Aditya is an avid painter too. He is pursuing painting professionally and loves painting landscapes and sceneries. Aditya’s paintings have been displayed in exhibitions and appreciated by legendary art maestroes like Wasim Kapoor and  Bose Krishnamachari.

Aditya’s latest interest is Coding. We were introduced to HashHackCode and Mr. Manu Sekar, CEO of HHC through a very close friend. The portfolio of FutureCoders which featured her son that she had posted, caught my eye and then there was no looking back.

Aditya’s coding journey has been beautiful. Unlike other online classes, coding classes are a stress buster for him. Initially he needed me to guide him and make notes for him but now since he has got the grasp of class, he loves structure, systematic learning, logic of math, sequencing etc. He is smoothly and mostly independently sailing through the levels. He loves animation and keyframes and can tirelessly code huge tables of keyframes without error. This has also enhanced his focus into minute details and developed his concentration. His sitting tolerance has improved remarkably. He gets to be himself and enjoys the process of learning to code and waits eagerly for the class in the evening. The joy and happiness while seeing the image and animation during coding class is priceless.

The young mentors are supportive and understanding. It is commendable that they have so much empathy for our kids at such a young age. Aditya has connected very well with them. He has found buddies in them rather than relating to them as authoritative figures. Aditya’s new love is Codezing projects.

Creative coding has added a new dimension to his thinking and reinforced his interest in art. It’s HHC which introduced tech education, computer programming skills in such a fun, joyful way to Aditya without pressure or stress. Credit for this purely goes to team HHC and their well designed programme.

Nurturing talent in our children is an important aspect for their growth and confidence. Today we can proudly say that even though our son is differently-abled, we are able to nurture his interest and talent with the support of open-minded and accepting people like those in Team HashHackCode who believe in a level playing field for everyone and are helping Aditya bloom into a confident young man.