From aspiration to reality – The Inspiring Journey of Coder Prem 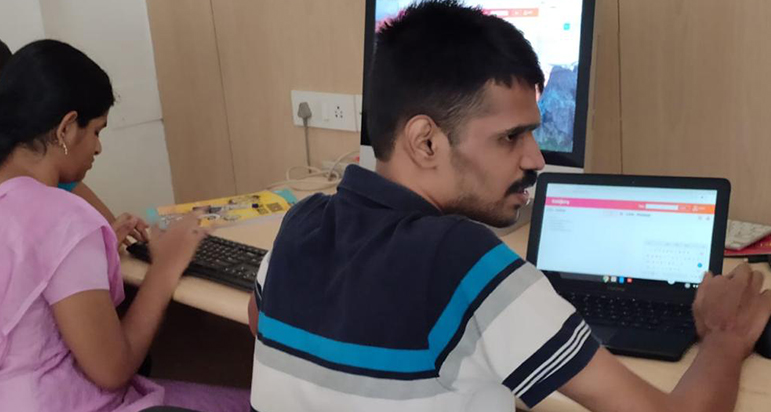 It was a chance meeting with Manu Sekar the founder of HashHackCode in 2019 during a job Fair workshop in Chennai that changed Prem’s life forever. Right from his childhood, Prem wanted to be in a computer job, probably inspired by his aunt’s sons who were in the US, working as software developers. Today his dream is close to becoming a reality.

I am Mangaialwar, the mother of Prem Sankar who is turning 25 years old today, and the first student of HHC. Prem was diagnosed with ASD at the age of 3. When he was 11 years old, we hesitantly introduced him to computers as we were told that exposure to computers would make the already existing speech difficulty worse. Prem was very comfortable working on the computer. Initially, he indulged in computer games, puzzles, etc. Soon we noticed that he had great typing skills. Prem could type very fast with no errors. He started Data Entry at the age of 15. I recall how we used various books and games to teach him typing. We soon hired a computer teacher who taught him Data Entry and Photo editing. While Prem showed a keen interest in computers, over time Data Entry got boring for him, as he was getting disinterested sitting over prolonged periods and typing on a blank white screen.

All this while, we were based in Trichy where Prem used to go to an inclusive school and also get trained in skating, swimming, and get occupational therapy. As Prem grew up he was also trained in music and yoga. His auditory memory is excellent and he is a really good singer. We are proud to say that Prem also represented Bharat II football team, Special Olympics-2019 in Chennai.

After a few years, since Prem’s communication difficulties were not being addressed in Trichy, we decided to move to Chennai in 2018. We were unsure about how Prem was going to take this change and what his future held for him. It was here that we happened to meet Manu Sekar in an event and were highly impressed by his ideology and vision of how our children can use technology to become skilled individuals and create a professional career for them.

Being the first student to register in the HHC Program, we pride ourselves that Prem’s code name was ‘User01’ in HHC. Prem loved his coding classes right from the beginning with his mentor, whom he fondly called ‘Manu Anna’, which means elder brother in Tamil. The initial days of learning to code was a new experience, since Prem was accustomed to learning academics through strategies like answering in a word, filling in the blanks, matching the correct options, choosing from multiple choices, etc. Soon his mentor understood Prem’s learning style and devised ways to reach out to him. Initially, they began familiarising steps of coding using the whiteboard and marker, Flashcards, etc and when the time was right, they made a smooth transition to interactive online classes. Manu & HHC team taught Prem coding intuitively. Whenever they faced a hurdle in learning, Manu and his team quickly came up with alternate strategies to make learning easy and effective and catered to Prem’s needs.

Prem took a keen interest in Creative Coding and enjoyed what he was doing, as it was more interactive, unlike data entry. He was able to get the immediate output of his work and learn new things. Prem enjoys using multi-screen. He never got bored as there was always something to learn.

Soon Prem was sailing through the course happily and nearly a year later, his confidence levels have increased manifold. He is a dedicated student and absorbs everything that is taught to him, earnestly. His interest is evident by the fact that he always looks forward to the classes and needs no coaxing whatsoever to sit before the computer and attend the classes. As we progressed through the levels, his sitting tolerance and concentration level improved as compared to before. Earlier Prem had very little sitting tolerance. I believe the reason this worked so well was because Prem was genuinely interested in what he was doing.

Connecting what he learnt through Creative Coding with real-world examples enabled him to visualize the code in real life. Prem enjoyed when there was an assignment given to him to code actual examples such as classified ads in the newspaper, where he had to guess the HTML structure and the CSS code. As Prem’s skills improved, we started creating small HTML pages about his family members, camp planning, and his aunt’s birthday. We noticed that Prem was proud of his work and developed self-satisfaction. It was a joy for us to see how Prem had found his passion in work and could think about a professional career. We observed that he has developed a sense of work, responsibility, and a realization that he has come to the level of a professional. It’s heartening to see that he is well aware that he has to complete a task within deadlines and is willing to put efforts to finish tasks within a set time frame. Prem just finished part II of the professional web designing course offered by HHC.

Prem’s relationship with me has evolved and taken new dimensions too. From viewing me as just his mother and teacher, he now looks at me as a co-worker. From a young boy trying to escape from doing tasks by throwing tantrums, Prem has now transformed into a responsible young man who voluntarily comes to work. This is no less than a miracle.

From being uncertain, hopeless, and skeptical we have moved to a state where we are content, confident, and full of hope of having a career and a purposeful life. This was made possible only because of HHC. At HHC, they did not fixate on just a job for Prem, but rather focused on his strengths and developing a skill set that Prem could be groomed in.

Leading an independent and fulfilling life is something everyone aspires. The ability to break one’s boundaries, overcome shortcomings, and roadblocks in order to gain more control over life’s path is the cornerstone of transitioning into adulthood. It’s a turning point in a person’s life to know that they’ve achieved their own freedom. A differently-abled person is no different from anyone else when it comes to this aspect.

I am very proud to announce today, on the momentous occasion of Prem’s 25th birthday, that Prem will be launching his own website as a freelancer called “codewithprem.in” where he will be offering services through small businesses and celebration website. This has been possible only because HHC channeled his interest into a curiosity that built the foundation for Prem to learn and aspire. Our child was able to fulfill his dream and move towards being self-reliant, thanks to the unwavering support, mentorship, and belief in Prem’s abilities by team HHC.

Today as we take a new step towards independence, I seek the support and blessings of each and every one of you in Prem’s new endeavor.