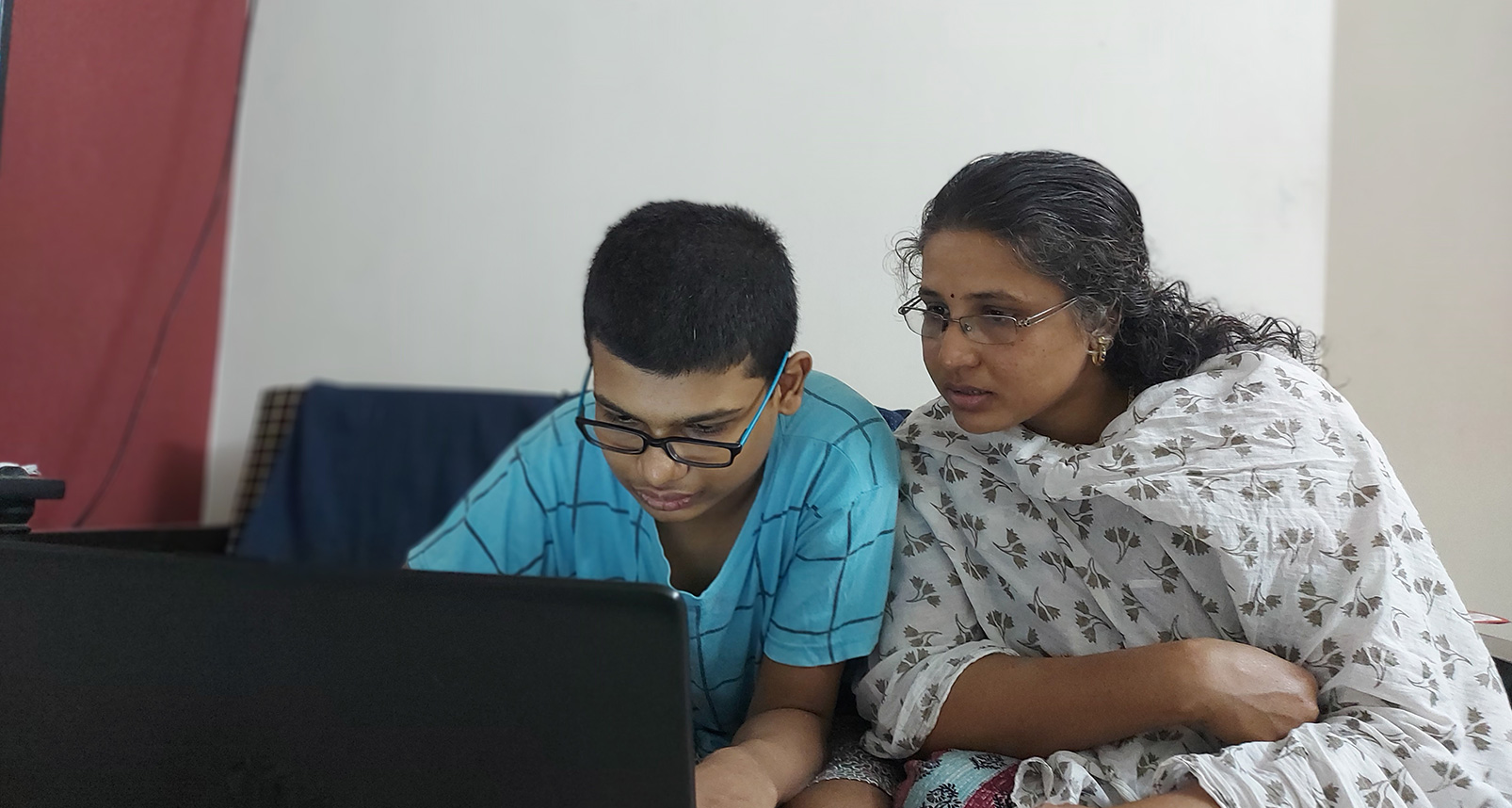 Our only expectation when I was carrying a child sixteen years ago was that our baby should be a healthy one. We had no other aspirations besides this. I had a normal, happy and uneventful pregnancy. Kirthik was born in the port city of Thoothukudi, Tamilnadu. We were ecstatic when our baby was born and felt blessed.

Kirthik seemed like any other child during his early years and achieved all his milestones on time. He wasn’t very expressive for his age though and had poor eye contact with people. He sometimes seemed very adamant and cried a lot at night. He would rather spend time watching TV ads and specific movie songs instead of engaging with people. He preferred to sit by himself holding small objects in his hand rather than engage in conversations. Although we were concerned, we brushed aside the nagging doubt whether something was amiss by telling ourselves that boys, as a rule, start speaking later than girls.

We enrolled Kirthik in a nursery school nearby hoping that giving him opportunities to mingle with kids of his own age would set right the gap we noticed in his communication skills. Kirthik immediately started saying alphabets, rhymes and things he had perceived auditorily with prowess. He had very good memory power and a craze for numbers. He was able to sit patiently for an hour at a stretch engaging in activities that interested him. By three, Kirthik could recite about 60-80 Thirukurals (A classic Tamil text consisting of short couplets). I would always look forward to teaching new concepts to Kirthik because his grasping power was exceptional. I was so happy and proud of my son. We were elated that our son had finally started talking. At that point of time, we didn’t know the distinction between ‘speech’ and ‘Communication’. It’s only later that we realised that even though Kirthik could utter a lot of things that he was taught and had heard at school, his ability to communicate with people remained unchanged. It pained me that my kid wouldn’t even address me as ‘Amma’ (mother) which is generally the first meaningful utterance of most children. He remained aloof and did not even use words to convey even basic needs.

We were completely unaware of the life changing event that was in store for us. When Kirthik was three and a half, we went to Chennai to attend a family function where we had a chance meeting with a doctor. Based on our inputs and his observation, he referred us to a Pediatrician. We returned to our native completely ignorant of the drastic turn our life was about to take. As suggested by the doctor, we visited a Paediatric clinic. The doctor evaluated Kirthik thoroughly and a diagnosis was made. The doctor’s report clearly mentioned Autism Spectrum Disorder. It was the very first time we had heard the words ASD. Ignorant that we were, we didn’t take the diagnosis seriously. The doctor explained what ASD was and urged us to move to Chennai. He explained that it was crucial for Kirthik to get early intervention services and therapies immediately. It was only then it struck us that we were dealing with something that was a lifelong condition. Kirthik was three and a half at that time and we were grief stricken beyond words.

I broke down completely. My son’s life and future became a huge question mark. As parents we went through turbulent emotions of shock, pain, anger, disappointment and spent many sleepless nights. My family came to our rescue and supported us. After consulting them, we decided to shift to Chennai immediately. My husband was working at a government school as a teacher and couldn’t move straight away as he didn’t get a  transfer to Chennai. So I decided to move with Kirthik to Chennai and stay with my parents. I had never ever imagined at that point that Chennai would be my place of stay forever from then on.

Shifting and adapting to a new city and a new scenario was a great challenge for us and especially to Kirthik. He grew more adamant because of the changes in his environment. Intensive intervention in the form of Special education, Occupational Therapy and Speech Therapy were given to Kirthik. It was at the therapy centres that I got an opportunity to meet other parents who were sailing in the same boat as me. Sharing my experiences, triumphs and pain with them gave me a sense of consolation and they became more than family to me. I felt that I had a support system that I could fall back on for guidance and realised that I was not alone in this difficult journey.

Kirthik was admitted to a special school and the main focus was Activities of Daily Living. Gradually he achieved the goals set one by one with the guidance and advice of special educators, therapists and senior parents. He started reading words in Tamil as well as in English. His writing skill also improved a lot. Though it was not legible, he was able to write independently. He began to communicate his basic needs using one or two words. Since  Kirthik didn’t have behavioural issues when he was younger, managing him in school as well as at home was easy. Things started seeming to finally fall in place and I felt at peace.

While I was wondering what the next plan of action for Kirthik was, I came across a message on a Whatsapp group about a seminar being conducted by an organisation called HashHackCode. I attended it with Kirthik and he seemed to enjoy it a lot. I met Manu Sekar the CEO of HHC there and he patiently explained what HHC had to offer. I was impressed by the meeting and the feedback I got from parents whose kids were already enrolled in the program and decided to give the program being offered a try.

Kirthik took time to understand the concepts being taught and slowly and steadily started catching up. He showed a lot of interest in completing the projects and was continuously on the lookout for new information. He was very quick at typing and grasped a lot of CSS attributes. His artistic abilities took wings and he soon started using the concepts taught to make projects of his own such as greeting cards, poster cards and animation work with social awareness themes. He has even created a calendar with 12 different themes using codes taught in HHC. He recently completed the 10th Level of Creative Coding and has reached a level wherein he can code without any prompts.

All my doubts and apprehensions regarding the course were laid to rest. Detailed feedback of the performance was shared with me regularly after each level, which  was very reassuring for me as a parent. Whenever Krithik was being uncooperative during the classes due to mood issues, the mentors would deal with him patiently and understandingly. Krithik’s reasoning skills and logical thinking evolved during the classes and this was a revelation to me. I feel HHC is one of those rare organisations addressing needs of individuals who are neurodiverse and offering many people like Krithik hope and assurance through kindness and empathy. The team is doing a fantastic job.