Behind the scenes – Decoding the inspiring journey of 10 year old Shagnik into Creative Coding! 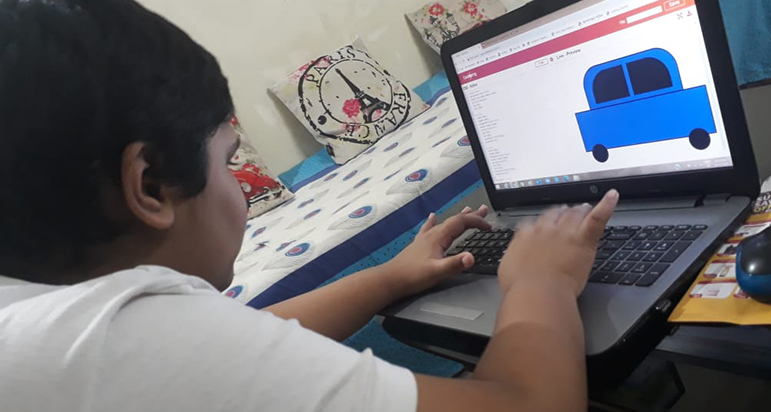 Technology has made remarkable progress in every sphere of life over the past few years. People from all walks of life use technology and are becoming more and more tech-savvy. However, when it comes to children, there’s a constant argument as to whether technology as a means of learning is a boon or a bane, as opposed to traditional ways of learning. Parents and professionals have divided opinions about whether technology is bad and if yes, how much is too much. As parents we too were doled out with advice to keep our child away from gadgets and all they had to offer. We as parents were in a dilemma whether to follow the advice of the experts or to go by our gut feeling. We took the decision to go against the advice because we realised that technology is the key to unlocking our child’s hidden potential. It was a great decision actually.

I am Sujata Sett, a proud mother of an adorable 10 year old son Shagnik. Shagnik was diagnosed with Autism Spectrum Disorder (ASD) at the age of 2.6 years. He perceives the world around him very differently from the way you and I would. He has difficulties with communication, social skills, restricted interests and repetitive behavior. Despite his challenges he has always surprised us with his creativity. Right from childhood, Shagnik was fascinated by numbers, alphabets, vehicles and gadgets. Rather than looking at it as a meaningless obsession, we used his deep interest in these areas to teach him many other skills. Being a strong audio-visual learner, he learnt different concepts from YouTube videos, Google and different games by exploring them himself. We observed him watching automobile engineering videos keenly a few years back. He wished to make such models too. He often used to craft vehicles of his choice (mostly bus and train) with waste boxes.

This skill advanced to drawing diagrams of such vehicles. Seeing his interest in this area we introduced him to MS-paint and showed him basic shapes to draw his favorite vehicles. Within a span of 1 year we were in awe to see his creativity by self-exploration of the tool. Soon, with time, the complexity of the art work also increased. I am proud to share that his digital art work was printed as a calendar and completely sold out in the last 2 years. He gained tremendous knowledge about trains all over the world by exploration using technology available to him.

His other strong point is his typing skill. Our son could type tirelessly, hours on end. On one such day, he noticed html coding from a typing tool and conveyed his wish to learn the same. We were more than thrilled, because we always follow and support his passion. We began searching for someone who can teach him coding. We were on the lookout for a mentor who would understand him and would be passionate to teach students who learn differently.

After many futile attempts, I got to know about HashHackCode from a parent and professional in a WhatsApp group. We contacted them and a formal assessment was done to check Shagnik’s eligibility. We were very excited after talking to Mr. Manu Sekar, CEO of HashHackCode who took Shagnik’s assessment and assured us that he can learn with HHC. Shagnik started learning to code from June 15, 2020 and is currently in Level 3. Initially, we were a little worried as the sessions were to be done in remote learning mode, given the present circumstances, but we were surprised to see Shagnik’s growing interest in coding. He looks forward to the sessions eagerly. He is enjoying the learning process and using coding to express his ideas.

It’s been 3 months since we started a new journey with HHC. This was a novel experience for all of us since Shagnik had never attended any online session to learn any new concept from an unfamiliar person. Our apprehensions were laid to rest soon and remote learning worked fantastically when it came to learning coding. It actually is an achievement for Shagnik and us.

During the coding classes I was advised to use paper and pen for planning the pattern, whereas his mentor used Google drawing. Shagnik however was very comfortable with this format and he soon switched over to Google Drawing and started drawing his own creations using the same. Earlier his interest was only in the area of vehicles, but after we started coding classes with HHC, his interest has shifted from vehicles to other areas like flowers, traffic signal, Indian flag, bird, God etc. Recently Shagnik came up with a project of Ganesha which was highly appreciated by fellow coders and their families. Before going about the project, I narrated the mythological story of Ganesha. He keenly listened to the story and I was happy that learning was happening in other areas too through coding. I always try to generalize his learning by associating with the real objects/incidents/situations/hands on activities etc.

Shagnik loves to see other coders’ creations in HHC Whatsapp group and gets motivated to create different things rather than only his favorite vehicles like earlier on. He looks forward to the sessions. He loves the animation part, since it adds an element of movement to his creations. He finds concepts involving percentages a little challenging. He loves hover and transition properties which are used to create movements on the screen since he gets a lot of visual sensory inputs through it which he enjoys. He loves his mentor’s teaching style. He greets her and communicates with her effectively.

From the time Shagnik has started taking Coding classes with HHC, his sitting tolerance has increased. He is also able to logically think as to what mistake he has made and correct the same. He has overcome his restricted and intense interest in vehicles and is able to apply concepts taught in the classes to a wide array of topics. His skills of interacting through remote learning has been a step forward. He is also expressing a lot of emotions while doing projects through coding. HHC has given a beautiful platform for students with diverse needs wherein all the mentors, students and parents of HHC work together as a strong team. I appreciate Mr. Manu for giving Shagnik and others like him an opportunity to showcase their talents and become productive members of the society.

Interesting tid-bit: In a session, there was a property called “auto” (where he had to give the height value as auto). Shagnik found it quite amusing that the vehicle auto, was being used to determine the height and width values. I then explained the meaning of ‘auto’ in the context of coding.