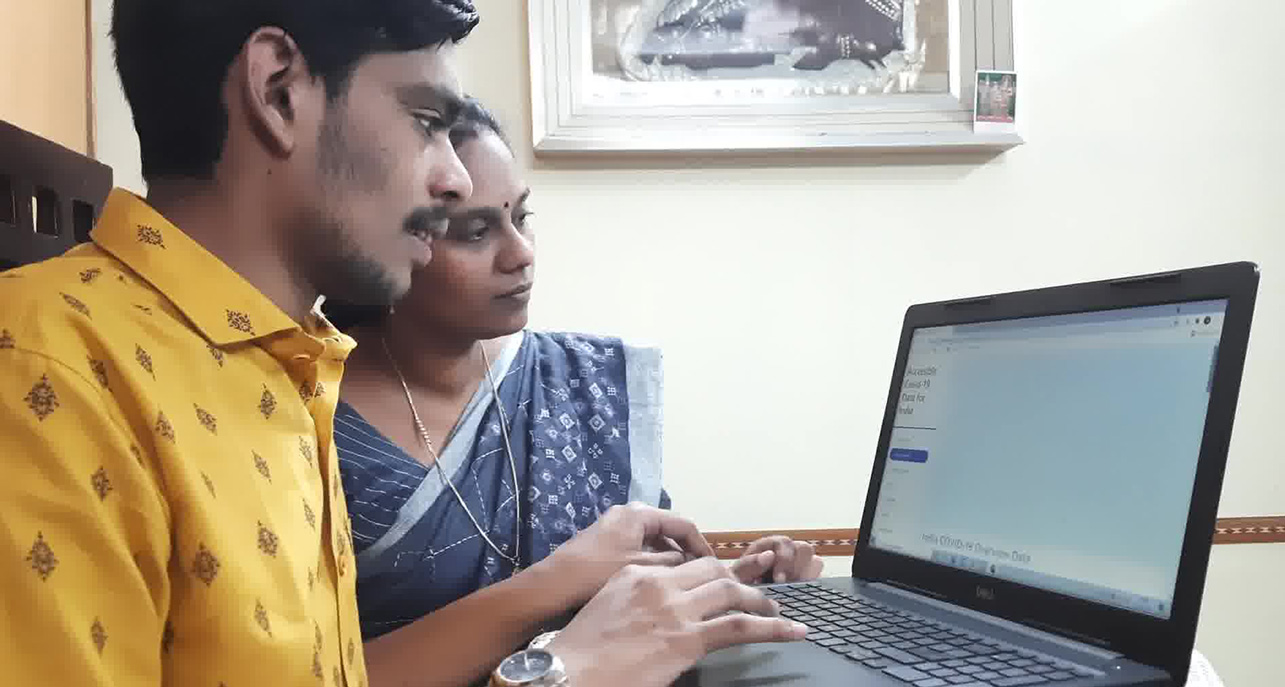 Saravanaraj was born on September 12th 2001 at Madurai, the historic temple city in Tamilnadu, South India. He is our second child and has an elder sibling. As a child Saravana’s physical development was completely normal. At around the age of two and a half, we became aware that his milestones were getting consistently delayed. Saravana exhibited traits such as lack of eye contact, limited ability to initiate a conversation and preferred solitude. His social interaction was limited to a select few known people only. He was completely unaware of his surroundings and was very quiet for his age. A series of visits to various specialists confirmed their worst fears that our son had Autism. At that point of time, little did we know that the long road ahead was going to be a very difficult one for us. As parents, we had dreams that our son would grow up to be a fine, confident young man who would excel in academics and sports. Our dreams were crushed and our life came crumbling down. Heartbreaking as it was, we slowly came around to the realization that our son was Autistic and that there was no medical ‘cure’ for the condition.

As soon as we became aware of Saravana’s condition, we tried to ensure that he received the best education and therapy possible. There was no way Sarvana could get proper intervention or opportunities in a small town like Kovilpatti, where we were based. Hence we took a  decision to move to Chennai with our children, where the best options were available.

The challenges we faced were daunting. It was an unnerving task to get Saravana admitted into a mainstream school. The most intimidating obstacle we faced was convincing schools to accept a child with special needs. The bigger the school, the more uncooperative the people  were. We had to enroll  Saravana in smaller schools and help him get involved in day to day activities in the hope of making him lead a normal life. The complaints came at a steady rate, mainly from parents who felt that Saravana should be in a Special School instead of a mainstream school. Despite these hurdles, I must mention that all was not lost. There were  helping hands and support that was offered by a few inclusive schools and their faculty which made a lot of difference in Saravana’s life.

As a child, Saravana displayed a remarkable knack of memorizing and recalling things, but lacked logical reasoning skills and hence, once he started graduating to higher classes, he found it difficult to handle logic based subjects like Mathematics, that required sequencing and analysis. Perseverance and hard work proved that Saravana was second to none. With hard work and excellent support from dedicated teachers and therapists, a visible change in Saravana’s behaviour became obvious. His eye contact became more focussed. His behaviour and language became more steady, albeit limited. His social behaviour too underwent a sea change. He became more inquisitive and even made a few friends.

In the year 2019, Saravana was introduced to Mr.Manu Sekar the CEO of HashHackCode, an inclusive tech startup that taught coding to neurodiverse individuals. Manu Sekar saw the potential in Saravana to become a coder and showed us the way forward. Manu Sekar is one of the most affable human beings that I have met. He was easily approachable and spent a lot of time with his students.

Saravana lived up to his potential and impressed one and all with his capabilities. The initial coding classes were like a walk in the park for Saravana. I was amazed at his ability to grasp the intricate concepts of coding. He was totally involved and was eager to attend the next class and learn new concepts. Brick by brick, Saravana’s coding skills were built and HashHackCode left no stone unturned in its pursuit to make Saravana a skilled programmer. Within a few days, we noticed that Saravana was developing skills that were earlier a challenge such as logical and computational thinking, sequencing, etc., thanks to HHC’s well researched teaching methodology, which emphasized on problem-solving through coding.

Being totally alien to computers and its operations, coding seemed intimidating to me as a parent. In order to help Sarvana with projects and home assignments, I too had to learn coding along with him. It seemed challenging at first, but HashHackCode organized a special workshop for parents to learn coding. It was very thoughtful of the organization to help people like me gain confidence and lay our doubts to rest. After a few classes, I developed coding skills and became confident enough to code on my own. HHC has empowered not only students but also parents like me to become comfortable with coding despite not having a tech background.

When the second wave of  Corona pandemic was raging around the world and people were keenly following the news about it, Manu hit upon a brilliant and compassionate idea to build a world class accessible website about COVID-19 statistics. He realized that although there were hundreds of websites dedicated to Corona statistics, none of them helped blind people to understand and follow the ongoing events on a daily basis. Thus was born, India’s first accessible COVID-19 website with an inclusive feature that helped the blind understand and follow data. Manu roped in two other neurodiverse students and formed the COVID-19 website team. It took a couple of weeks to write the code from scratch and finally the accessible website was ready. The data being vast, each of the three members was assigned specific states to update on a daily basis. It was not long before that people started taking note of the accessible website designed by neurodiverse individuals and reputed newspapers started covering the story. National and International TV channels also featured the story and highlighted the hard work of the team.

Saravana is now busy as a professional web designer and has designed a few company websites on his own. He is currently studying  BBA  from the University of Madras and is parallelly pursuing a freelance career, armed with the confidence gained through HHC.

HashHackCode has opened the door of opportunities for Saravana and us. The world took notice of us as an organization capable of producing quality tech products and apps developed by Neurodiverse individuals. It has made us optimistic of Saravana’s future. It also made me aware of my own strengths and capabilities. We are confident that our son will pursue a career based on the competency and skills that he has acquired in HashHackCode.