Rising above all odds – Alan’s story of grit and perseverance 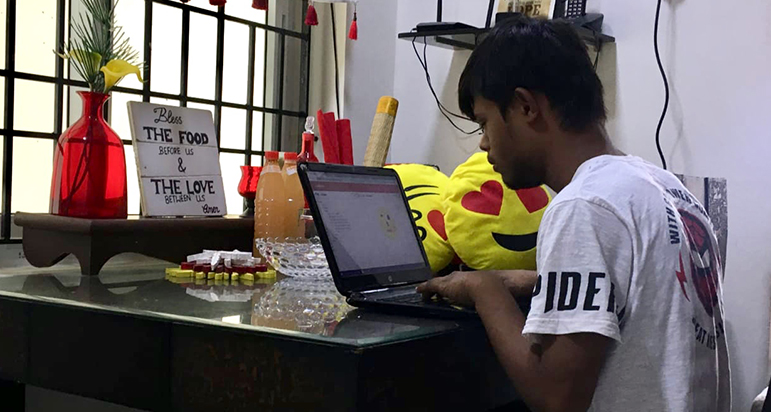 I was 33 years old when Alan was born. He had a flat nose, almond-shaped eyes, and short limbs. He looked like a doll. I felt blessed. A few hours later, I was told that he had Down’s Syndrome and was born without an anus. Even before I could absorb what Down’s Syndrome meant, he was whisked away to a neonatal intensive care unit for his first pull-through surgery. His second and third surgeries were performed at intervals of a few months each. He was the first baby to undergo laparoscopy in Chennai under the guidance of a group of surgeons from Switzerland.

Life with Alan was a daily emotional roller-coaster of disappointments and successes. It took effort, time, fortune, dedication, and patience to raise a child with an extra chromosome, all by myself. When I was at the end of my rope, I met Dr. Shanthi Rangarajan, a pediatrician, and neonatologist – a key person who has left an indelible impression on Alan’s life. Her guidance helped me take Alan up to a new level, thus gradually redesigning his life. I found new confidence and discovered the innate capacity I possessed to bring up Alan and helped him with every milestone.

Now Alan is 17-  A budding coder. Alan and I began our journey into coding at the time when Alan was pursuing his 10th std. We were pointed in the direction of HashHackCode, where Manu Sekar, the CEO of HHC  helped us find an initial entry point into learning the process of coding. Manu offered us the invaluable support needed to get started and gently introduced Alan to the world of Coding.

Alan experiences an individualized, personalized, and blended teaching-learning process, in an environment that is optimistic, engaging, and sparks his desire to learn and create more. Learning to code has given him the ability to understand ‘why’ and ‘how’ technology around him operates. In addition, systematic thinking keeps evolving and developing as our children grow, but the application of the primary concepts of coding:  sequencing, loops, repeating of tasks, has largely influenced Alan’s sequential thinking. It has enhanced his logical organizing skills and preparation of things in his routine life, thus moulding him into a confident and independent child.

Due to the Covid 19 pandemic, Alan had to shift from adaptive learning to remote learning. At first, I had my own inhibitions whether online classes would make the learning curve steeper for Alan, but quite to the contrary, this change improved his computational thinking and bridged the digital divide, granting him more access to technology and creative engagement.

When I ask Alan to practice coding at home, he would first look for objects around, symbols that catch his attention and start coding. When working or creating projects, even though he faces difficulties in completing his projects or challenges on his own, he can assimilate the keywords or the properties involved in attaining his goal. For example, he wanted to code a smiley similar to a smiley cushion at home. Arriving almost at the final stage of his creation, he incorporated animation all by himself.  Having hit the goal, his eyes would light up with joy and confidence. Thus he finds inspiration from the world around him and recreates it through coding.

Furthermore, online teaching-learning forced him to interact with instructors and respond spontaneously and loudly when prompted. When Alan started his coding classes at HHC, he would decline to answer questions when prompted but now, thanks to online classes, he has reached a point of managing classes all by himself, responding rapidly and also at times teasing his instructors.

I have read that colors are powerful psychological triggers. A plethora of colors and combination of colors in coding helps him retain his attention span, stimulates his visual senses, and expresses his emotions. It also influences the way he perceives things.

Today the world is becoming more and more tech-reliant and coding is considered a new form of literacy. Encouraging children like Alan to be a part of this digital movement and giving them equal opportunities for employment is imperative for an inclusive society. I am grateful to Manu and his team for their tireless efforts and extraordinary care extended towards Alan. To conclude, I wish and pray with the support and guidance of Manu and his team, Alan will move mountains one day.