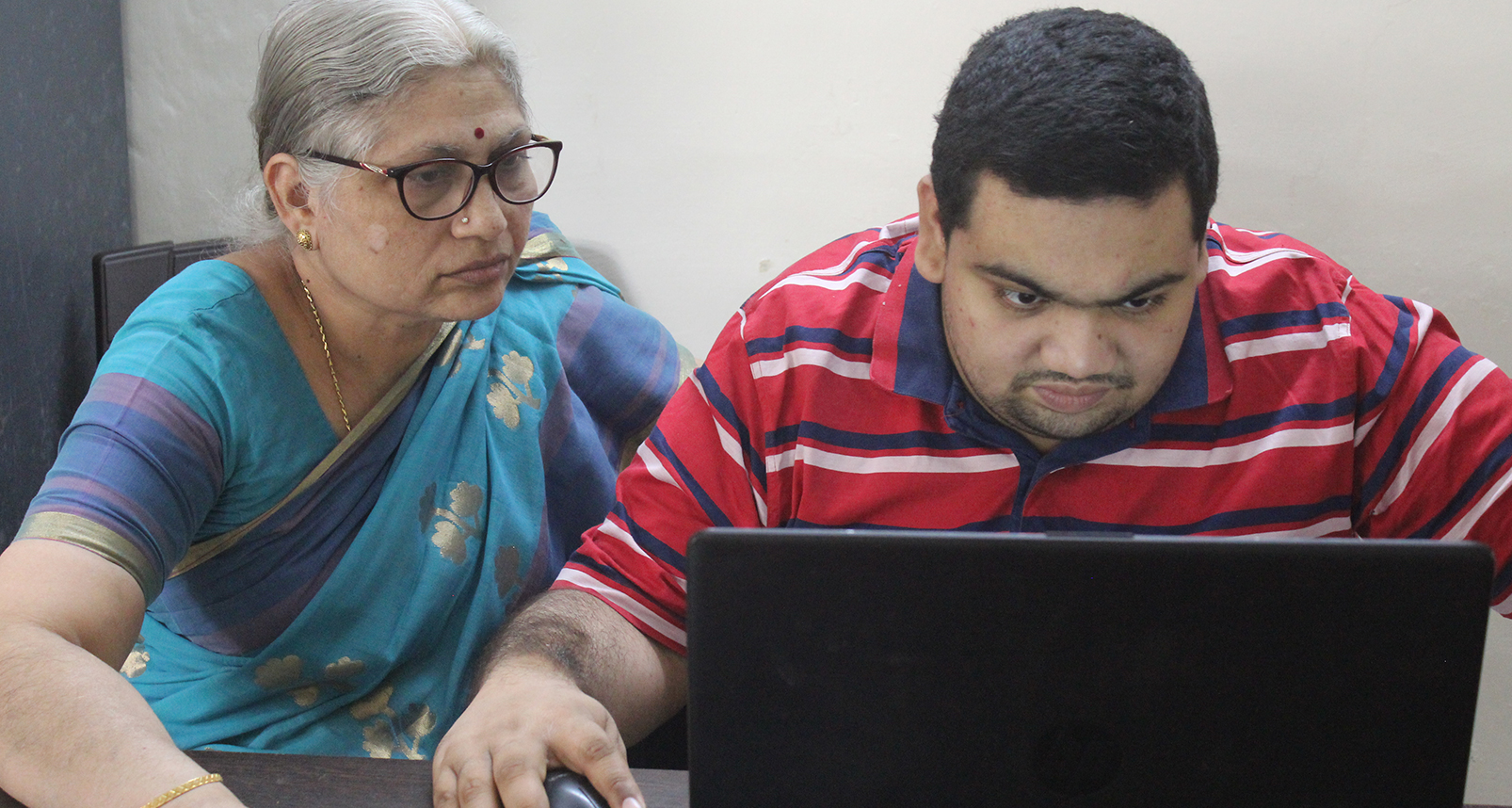 We were a family of four, based in New Delhi. My elder son was born with a congenital mitochondrial disorder which was characterized by a complete lack of motor control, movement disorders, and frequent epileptic seizures from the day he was born.

Arvind who is 24 years old now, is my second born. He was a precocious child who was fast at everything. He attained developmental milestones early, could put puzzles together at remarkable speed even before he was a year old, and was a joyful kid. The first three years of Arvind’s growth and development were almost normal with few exceptions. Although he showed exceptional cognitive skills, his vocabulary was very limited and he spoke only in two-word phrases.

My elder son’s condition started deteriorating around 1999 and it became a matter of life and death. While I was tending to him in the hospital, I noticed that there was marked regression in Arvind’s speech. He was around 3 years old. He also started engaging in meaningless repetitive play for hours on end. It seemed like the child I knew had totally transformed into a stranger who stopped interacting with the world, stopped smiling, crying and had withdrawn into a world of his own and refused to come out of it.

Since I was already associated with an organization working with special kids, it didn’t take me long to realize that Arvind was showing signs of Autism. A formal diagnosis confirmed my worst fears and my world came crashing down. In the year 2001 my older son passed away after a prolonged battle. Along with mourning the loss of one child, I now had to face the reality of dealing with another child with a lifelong condition.

Then started the arduous journey of assessments, therapies, interventions, and consultations with experts. Although Arvind showed improvements, his ability to speak was lost forever. I had to figure out novel ways to communicate with my own child.

For a few days, I was clueless as to how to communicate with him, and the disconnect that I felt was agonizing, to say the least. Gradually I introduced him to flashcards and Arvind began to answer simple questions using them. I was curious to know what was going on in his mind. Flashcard had limitations, so I introduced him to computer typing with physical support. He soon started expressing his emotions eloquently. Much to my surprise and joy, Arvind started typing not just his needs but also small poems with very profound meaning.

When Arvind was around 14 years and things were seeming a little optimistic, my husband who had chronic health issues passed away leaving me all alone to deal with all the challenges that life was hurling at me. Thus, began my struggle as a single mother parenting a child with Autism. The odds seemed completely against me but I decided not to give up. The demise of my husband made me move closer home to Chennai from Delhi.

Although Arvind didn’t appreciate the move, he adjusted to the new life after some time and settled down. I noticed that he was very quick in calculations and showed great interest in topics like planets, gravitation, etc. Although he was good in theory, practical lessons and motor responses were difficult for Arvind. Though Arvind could type, he was not introduced to any other functions of the computer. He typed using only the index finger very slowly and at times expressed pain in the finger. I tried to teach him typing using all the fingers but my efforts went in vain. His sitting tolerance was perhaps the greatest challenge. I was looking for something which could improve his typing speed and his sitting tolerance which in turn, could satisfy his intellect and his interests.

In 2019, I founded Gurukulam centre for children with special needs in order to help other children like Arvind learn life skills and vocational skills. Arvind continued to show improvements in a lot of areas. His linguistic skills are his greatest strength. The motto comprising of three words FEEL, LEARN, GROW in Gurukulam logo were given by Arvind.His poems and conversations were printed as a journal/planner/diary by the organisation and he contributes to the content for our website.

It was in Chennai that I was introduced to Manu Sekar, CEO of HashHackCode through a friend. Initially, I was skeptical whether Arvind would be able to sustain interest in coding. I was apprehensive about how the mentors would communicate with Arvind since he was completely nonverbal. All my doubts were laid to rest very soon.

Since Arvind couldn’t answer questions regarding the pattern on the screen to ascertain whether he has understood concepts or not, Manu Sekar devised ways of eliciting responses from Arvind by giving multiple-choice questions on the screen itself for Arvind to choose. Arvind being a quick learner understood his mentor’s instructions well and replied to them by choosing options. As the classes progressed, both Arvind and the mentors learned how to communicate with each other. They had a way of dealing with Arvind in a very gentle manner with sensitivity and patience. They were kind and treated Arvind with a lot of respect and dignity. At HHC, all the mentors are young graduates. By giving such youngsters an opportunity to mentor neurodiverse individuals, HHC is creating an ecosystem based on empathy and understanding. It is paving a pathway where inclusion happens in the true sense and people embrace diversity as a norm rather than an anomaly.

As levels progressed, Arvind started becoming more independent in writing the code and started enjoying the process of coding and each level was a confidence booster. He diligently practiced every day and showed a lot of curiosity. Even his lost interest in Maths started picking up again.

HHC was able to curate the interest in Arvind to code and that led to a tremendous improvement of his sitting tolerance. From a person who couldn’t engage in an activity for more than a couple of minutes, Arvind was able to now complete an entire class of 45 minutes to an hour without the need to take breaks.

The future that I want for Arvind is for him to be happy in what he is doing and be treated with dignity. I have had bitter experiences where Arvind’s potential wasn’t recognized because people went by the external appearance, mannerisms, and lack of ability to communicate verbally. People have even questioned whether the beautiful poems penned by Arvind were actually his own.

That’s where I’m grateful for Team HHC and the community they are building. HHC was non-judgmental and believed that there is more to a person than what meets the eye. They weren’t prejudiced towards Arvind because of the apparent shortcomings. In fact, they worked around the challenges, curated, and modified the program to suit the needs of the student, and worked on his strengths. I’m grateful to HashHackCode for helping Arvind to achieve a sense of accomplishment, self-worth, and a feeling of belonging to a community without bias.