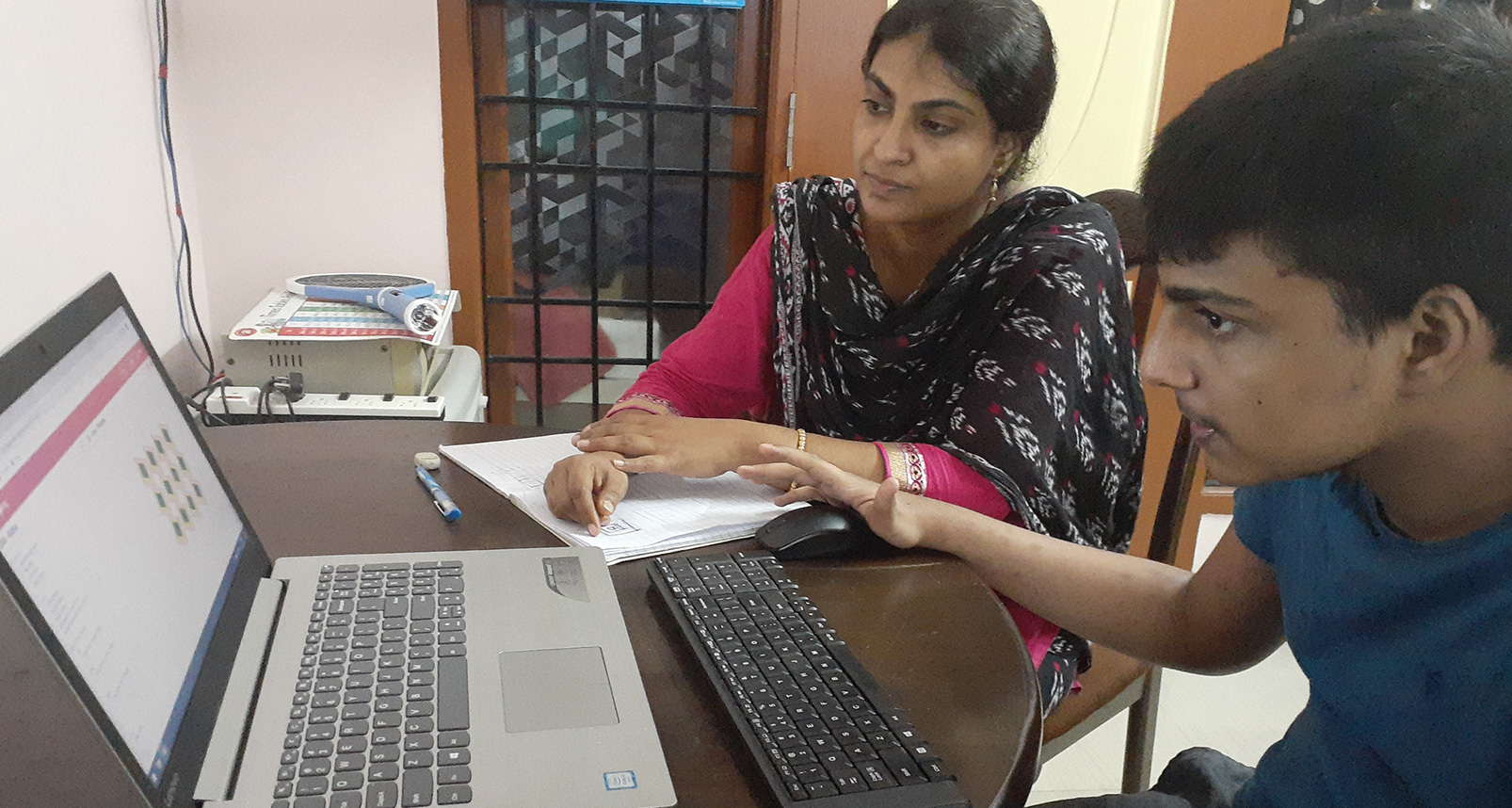 One day, I was watching my two-year-old son play around with a birthday gift that required him to put colorful rings inside pegs to match the number specified. Instead of matching the rings with a particular number, Sadiq happily started sorting rings according to their respective colors and did a great job of it. I admired his logical skills and a passing thought occurred that this kid would do so well in coding someday. 12 years later, when we were at the crossroads and it was time to decide which path to take concerning vocational training, it was the same thought that occurred to me again and ignited a need to seek avenues to get training in Coding.

SADIQ, meaning truthful, was the name chosen by his father from the pages of the Holy Quran. Sadiq was born in India and when he was 5 months old, we joined his father in Sharjah. Though we were first-time parents, we were confident that we would be able to give the best care to this bundle of joy that had arrived in our life.

Sadiq’s motor milestones were normal but we noticed that his interaction with us was minimal.  We did not suspect anything serious and attributed it to the lonely ‘flat’ life in Gulf. During some occasional get-togethers with relatives and friends, we did hear casual comments like “He seems to be in a  world of his own”, “He is not giving eye contact” etc.

Sadiq had started making cooing sounds, babbling, paying attention when his favorite music was played on TV, etc but did not start imitating sounds or saying a single word even as he turned one. During some of our visits to the pediatrician, we put forth our concern. We were told to wait for some more time and then check his hearing. As a mother, I knew my son could hear well and thought that a child who can hear will also talk in a matter of time.

I had not heard of ‘Autism’ 14 years back. During one of our visits to India, we decided to take the issue more seriously and our inquiries led us to Dr. M.K.C. Nair of the Child Development Centre, Trivandrum who diagnosed the condition as Autism. Sadiq was 1 year 10 months old then and thus began our Autism journey. I decided to stay back in Trivandrum because of the availability of family support that was crucial at this distressing time. My husband went back to Gulf and I started living with my parents. I am a mechanical engineer and picked up a job closeby, but my days were filled with conflicting feelings of not being able to give my 100% to my child and not doing complete justice to my profession because of my responsibilities as a mother. I decided to end the dilemma that nagged me and quit my job to become a full-fledged mom.

Sadiq has always been a friendly child who gets along with people who understand him. Although he indulges mostly in need-based communication, he loves listening to me talking about the ongoing day-to-day activities while I am at them. He was interested in letters and numbers. He loved to solve jigsaw puzzles. Soon he started reading and writing.

Initially, we enrolled him in various therapies like speech therapy, occupational therapy, behavioral therapy etc. We also did a 3 months residential program in CMC, Vellore which trains mothers how to teach their differently-abled children. We started special education and also put him in a playschool. Sadiq went to a regular kindergarten school and did well academically, but the communication and social deficits made it difficult for him to continue there. The limited verbal skills and a lack of understanding of social nuances caused him a lot of frustration.

When he was 7, we shifted him to a special school for more specialized training. He took about two or three years to settle down there with the help of a very compassionate teacher. It’s here that I realized the importance of understanding and proactive teachers to work wonders in Sadiq’s life. As he grew up, I noticed that Sadiq had good memory power and computer skills along with the ability to think logically, which became evident when he used to play some games on his tablet. He also learnt swimming and skating.

When Sadiq turned 15, I started looking for avenues to teach him coding and came across HashHackCode through a parent group. I talked to Manu and fixed an appointment to evaluate Sadiq. I found Manu to be a very genuine person, totally aware of special needs and I enrolled Sadiq into the program. We had just completed a couple of classes and had to discontinue due to lockdown as a result of the pandemic. Then, one fine day, Manu informed us that they will be starting online classes. I was apprehensive initially but decided to give it a try.

From day one, Sadiq was quite cooperative during the class. His listening skills started to improve and it was amazing to see him follow verbal instructions. He was also comfortable with different mentors who he had never met before, teaching him. The young mentors who took the classes in turn were very patient and understanding. They were ever ready to clear all our doubts. The positive vibes from Manu and the mentors encouraged Sadiq to progress from one level to the next. The curriculum and the teaching methodology are very well planned. It helps to develop logical thinking, reasoning, problem-solving, and pattern recognition. The child is also encouraged to learn through trial and error methods. The mentors try their best to reduce the child’s dependency on the parent.

I could see a remarkable improvement in Sadiq both in terms of learning and his interest in the subject. I was exposed to coding during my college days and the classes with Sadiq helped me brush up my skills too. Both of us enjoy doing special projects like birthday greetings, new year wishes etc together. He especially likes to do animation. He feels very happy when he sees the final product of coding.

I appreciate the efforts and the dedication of the HHC team. They have a great vision to create job opportunities and to develop inclusive workspaces. I thank them for believing in the abilities of the differently-abled and giving them a chance to explore their skills in the coding field. I look forward to a long and successful coding journey with HHC.